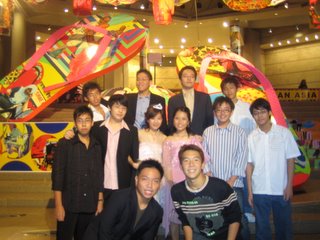 This picture was taken at the esplanade after the horrible prom. The prom was really badly done ( hotel would be a much better choice). Talkabout the hotel being expansive ($30 to $70) but the prom in school cost $45. It included crappy food ( not a free flow buffet), live band ( ronin, electrico would be better) and no games ( seriously no games, no table games or anything.) further more there was no service for $45 other then the poor council members serving us limited amount of drinks ( they had to go out and buy more due to the lack of drinks). horrendous. they should have been able to seen such stuff coming. and they only relied on the caterers? the food was horrible. and most people did not rock to roin even though i enjoyed it lol. the decorations are well horrible. a few strips of cloth + some aluminium foiled stars . all this would cost like $45 per head? outragous. the reception area has those things that wires were coiled on to only couvered by a cloth( though you were smart huh? damn stupid idea.) horrible. i want my money back.

I Am The Best. Thank You Mr Sim. 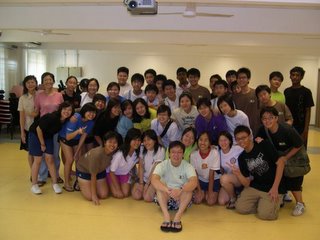 Kudos to Mr Sim for allowing us to play that awwsome i am the best game.
It Build Up People's Confidence And Bonded the band a great life experience i must say . thanks a lot =D

Alright. Coverage of The 2005th KCB Camp. Intially, We Just Had Practices in our school auditorium. Practiced Blue Ridge Saga with Guest Player, Mr Kenneth Koh on the Tuba. We Practiced Until Like 4 And Then we had games. Mr Kenneth Koh was playing soccer with Mr Andy Sim (yes only the 2 of them). After series of long passes, the games were stopped due to the next o level papers.

Practice resumes and we completed Blue Ridge Saga. Soon It Was Dinner time ( Yum!). After that was Practice again.

Then It Was TIme For NIGHT GAMES!

Morning the sun rises and breakfast was served,
Practice Continues With Copacabana
After that Lunch Was Served.

Then The "I'm The BEST" Game Proceeded.
Rules Are Extremely Simple.
1. Be Confident And Tell The Judges That You Are The Best.

I Must Say that this game was pure torture for some people who had no confidence.
Just saying i am the best was not enough. Body language comes in, eye contect and many more.
I did not manage to succeed in the 1st try but i pressed on and eventually managed to pass.
The KCB spirit was Strong and we Are unbeatable. We encouraged each other even though not every one was confident. This feeling is beyond words. Tears filled many people's eyes incuding mine.

i felt so damn pain today. unbearable. not physical but mental pain. my hearts aches. very badly. i hope for the best. fuck majong. Fuck Majong. Note i'm using the Word Fuck. Which i hate to use. fat bitch get a life other than majong. omg omg if anyone is reading this. whatever happened here killed my mood for doing anything. seriously killed my mood. i'm so sad depressed. what ever u name that got to do with something sad ; i'm feeling it.

Listen To Postcards From Singapore By james Barnes. its actually quite good.

Currently half way through my o levels. and now i begin

about my secondary school days. Believe me i wish not to leave school and rebel about everything like the "Down With The Student Council" scheme. Listening To Ross Roy And understanding its theme really makes me think. Why would some one commisson a composer to composer a piece about a school. But I'm Really Glad that The Did. Ross Roy is overplayed BUT Is Indeed a Fantastic Piece. Although Technically its not that difficult but emotions are required to play this piece.

Anyways, back to the topic. School really developed me a lot. With People like Mr Lawrence Tan( Kudos to You.), Mr Chong ( My initiater in Music). Just Nurtured Me To Who i Am And What i am.haha. Thanks Guys.

Top Five Most Unforgetable Stuff.
1st. The Pa Buei Do Spirit of Kcb (Cannot Be Beaten)
2nd. Friends Made. ( Theres a Reason Why Certain People Meet)
3rd. Times We Spent Crapping In Class. ( Slackers CLUB! hahaha)
4th. Performed During Teachers Day ( That 15 Minutes Of Extacy Was Not Forgettable)
5th. The Comerade Felt. ( I Love YOu Guys.)

School's Gonna End And I Don't want It To End.

5 Things I Will Miss Dearly.

Well i'm leaving kcpss at the end of the year. its a bittersweet moment for me. here are the top 5 things i will miss dearly.
1:KCB.Yes I Will Miss This Band. My Intiation was here and i will remember it =D
2:4Peace! FOR BEING THE BEST CLASS IN THE WORLD. lol
3:Friends Met And Made during my time here.
4:Memories Forged.
5:The Band Again. To Show That It Means A Lot to me